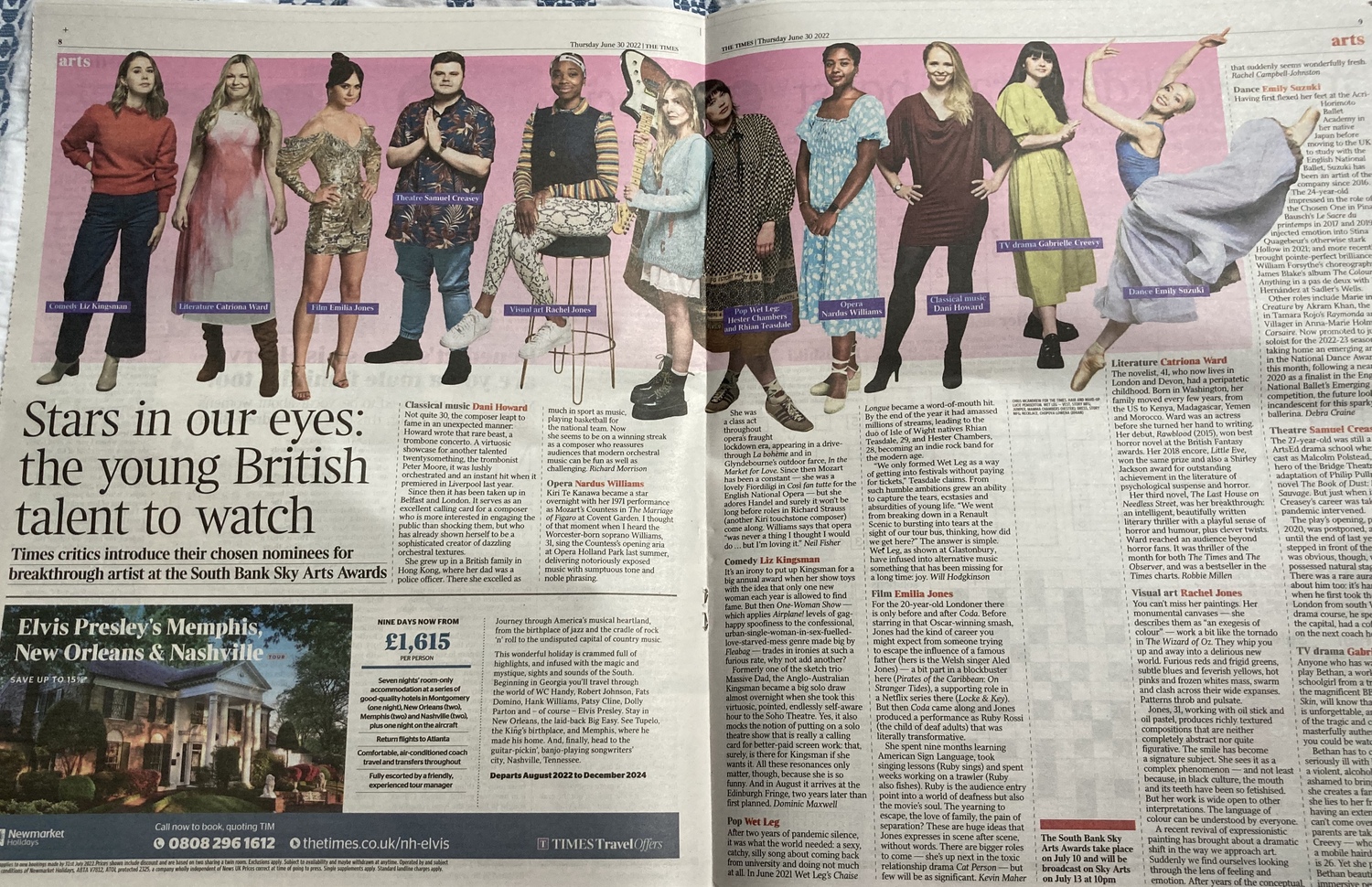 Hugely excited to announce today that composer Dani Howard has been nominated twice for the South Bank Sky Arts Awards – the first and only awards ceremony to celebrate every genre of the arts, including Dance, Theatre, Pop, TV Drama, Film, Classical Music, Literature, Opera, Comedy and Visual Art.

Dani is nominated in the classical category for her hugely successful trombone concerto performed by the Royal Liverpool Philharmonic and exceptional Tronmbonist Peter Moore. 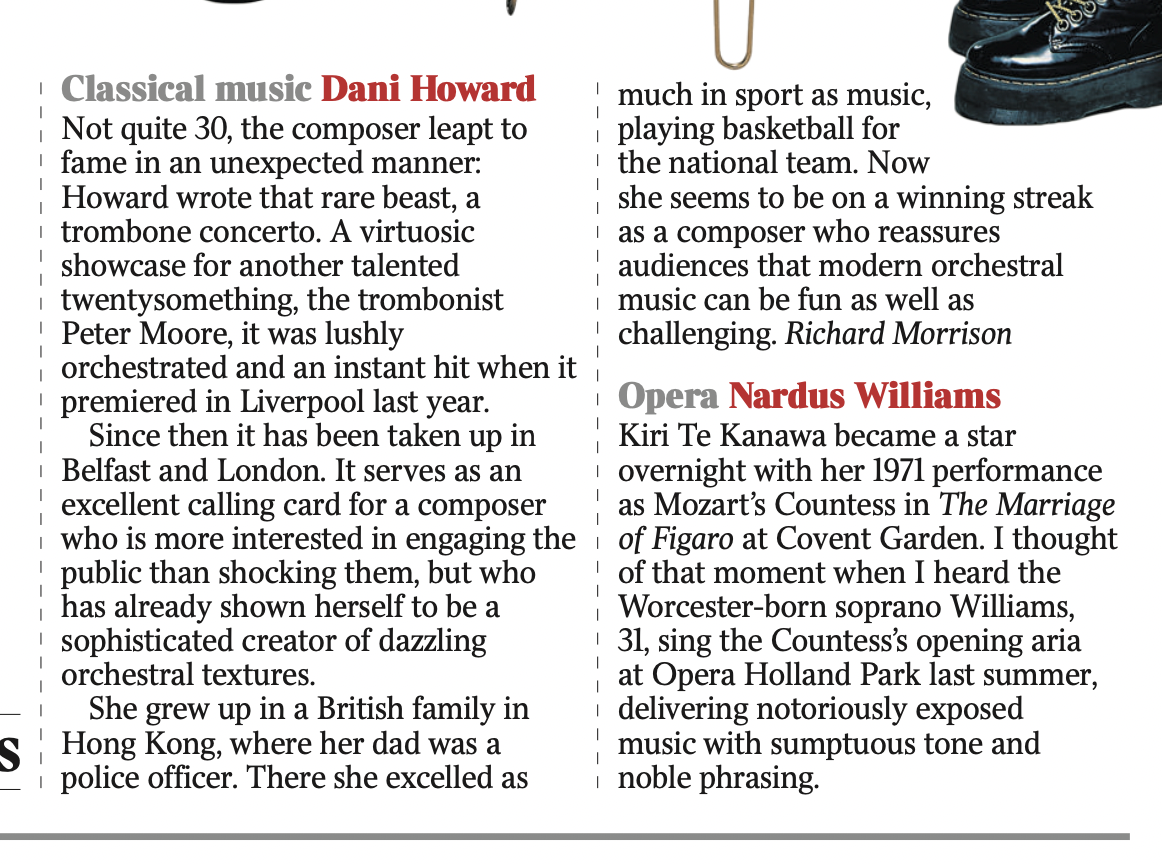 The awards are being held on Sunday 10 July, presented by Melvyn Bragg,  at The Savoy Hotel and will air on Wednesday 13 July at 10pm on Sky Arts, UK.

The Three Choirs Festival has appointed Naomi Belshaw to the role of chair of Board of Directors. Naomi Belshaw will be the first woman chair in the festival’s history and will succeed Dr Timothy Brain OBE, who, during a significant tenure as Chair, has seen the professionalisation of the organisation and vital modernisation of The Three Choirs Festival. Thought to be the longest-standing classical music festival in the world, it celebrated its 300th anniversary in 2015! Naomi steps up to the role of Chair as the festival announces a brand-new website, and with 3 weeks to go until priority booking opens for the Hereford 2022 festival. Full details of the festival’s exciting programme will be available online from 25 March onwards, but preview details of the evening Cathedral concert can be found here.

Dr Alexis Paterson, Three Choirs Festival Chief Executive, said: ‘I’m looking forward to working with Naomi as we plan for some exciting and ambitious projects at Three Choirs over the coming years. Naomi brings a wealth of experience and expertise to a board and organisation optimistic about the future and committed to ensuring the festival’s long-term impact for local communities. I’m grateful to Timothy for his dedication to the festival during my time as CEO and before, particularly in helping to bring about the successful merger of the three separate Three Choirs charities into a single unified organisation.

I couldn't resist writing about this new whisky. It so closely brings together my love of music and whisky. With Ludlow Gin being so linked to the Three Choirs Festival and also the Philharmonia Orchestra. Let me say no more here, but do check out my whisky blog to learn more! I am delighted to announce that Dani Howard has just received an RPS award for her Trombone Concerto performed by the star trombonist Peter Moore and the Royal Liverpool Philharmonic conducted by Domingo Hindoyan earlier in 2021. Reviewed by The Times at its premiere it was labelled 'An instant classic". It is an honour and a privilege to work with such a talented composer, Congratulations Dani !!! Isolated Pieces, a unique Charity Album supporting Youth Music that brought together 27 musicians during the lockdown, first single out this Friday! It will be released on Bandcamp and streaming platforms via Squeaky Kate label on 25th February 2022 with all proceeds going to support the charity Youth Music. This organisation, like all the contributors to this album, believes that every young person should have the chance to change their life through music.

It’s an epic album of 18 tracks involving 27 artists who have all contributed fragments to the jigsaw puzzle of the album independently. Still no one knows who else is involved and how they are connected to one another!  (With everyone from Steve Hackett, Benjamin Zephaniah, Mandhira de Saram to Elisabeth Nygård involved) Watch out as singles are released over the next months to celebrate this album and raise money for Youth Music.

The first single 'I Dance as I Rise' is due to be released this Friday 17th September - so please go to Squeaky Kate on Bandcamp to get your copy this week!

I am excited to announce that the PRS Foundation's Resonate database (in partnership with the Association of British Orchestras) is accepting as yet unregistered commissions from the last 25 years. I am overseeing this update so please get in touch for more information

Very excited to see the critical reception to Dani's first concerto on the 17th June, with the Royal Liverpool Philharmonic Orchestra and trombone soloist Peter Moore, principal of the London Symphony Orchestra. Described as “an instant classic… lush… riveting…” Richard Morrison, The Times. "Howard’s concerto is a work of substance and frequent beauty." Seen and Heard international It is still possible to listen to the concert on Radio 3 catch up and buy a ticket to stream the concert from the RLPO website. Please do check it out!

The Three Choirs Festival has appointed a new Association Vice-Chair to their Board of Trustees, amidst planning for their 2021 summer festival from 24th July – 1st August in Worcester. Naomi Belshaw takes over as Association Vice-Chair from Clare Wichbold who is stepping down from the board, after being involved with the festival for over thirty years.

Naomi joins Three Choirs ahead of the festival’s return to Worcester in the summer of 2021. Due to the COVID-19 pandemic, the festival did not take place in 2020, the first time it had been forced to cancel since World War II. After a challenging year, the festival is now looking ahead to a hopeful future; planning is underway for this summer’s festival and programme details are due to be released in the coming weeks.

Dr Alexis Paterson, Three Choirs Festival Chief Executive, said: ‘I’m delighted that Naomi is joining our board and know that her expertise will expand on and complement the skills of our existing directors. While this is a difficult time for all arts organisations, Naomi joins Three Choirs at a crucial point in our development and I look forward to working with her as we plan for an exciting future.’ 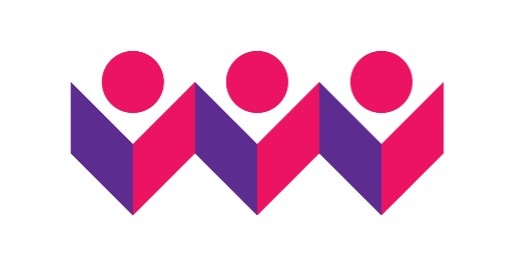 It's been a while, but here is my latest whisky write up! To celebrate my lockdown birthday I have chosen to write about a particularly special Japanese Whisky. Please do check out my whisky page for more! It is with great pleasure I announce the latest addition to Naomi Belshaw Consultancy, composer Kemal Yusuf. Naomi Belshaw will be working with Kemal on a long term basis; looking at future commissions, performances and career strategy.